There are two types of LCD in term of viewing mode, positive LCD & negative LCD.

A positive image on LCD display is when a pixel is "OFF", it is transparent; when a pixel is "ON", it is opaque. This mode of operation is mostly used where ambient light is high. And it will help with the contrast of the display, especially for a display utilizing a reflective rear polarizer.  An example would be a alpha-numeric character on a larger background.  The segments or dots on the character would absorb light (appearing dark) and the background would reflect light enhancing the characters.  Here are several typical Operational Mode & Viewing Mode combinations and the resulting images:

A negative image on an LCD display is when a pixel is "OFF", it is opaque; when a pixel is "ON", it is transparent. The portion of the display that could reflect light and give the characters definition in this mode is minimized.  Therefore, this mode is typically used when there is a backlight and the ambient lighting condition is medium to dim. Using a backlight, the transparent segments of the display will "glow". Since the backlight can go through the area when pixels are turned on. High ambient light  could wash out the backlight.  Here are several typical Operational Mode & Viewing Mode combinations and the resulting images (assuming a backlight with the specified coloration listed):

Every LCD has 2 polarizers, the front and rear ones. They are affixed accordingly across the front of the display viewing surface and across the rear of the display, to determine how to infuse light into the LCD.  Front polarizer is always transmissive and not changeable by user. However rear polarizer has three choices. Transmissive rear polarizer is used in low ambient application that require backlighting, and allow maximum transmission of the backlight brightness. Most, but not all transmissive displays are negative image, and we sometimes add colored filters to some areas of the display to highlight different annunciators. Another example of a transmissive polarizer display would be a transparent window where you could see the segments superimposed over your line of vision through the display window (like in Sci-Fi movie). Reflective displays have clear rear polarizer that includes a diffuse reflector. They are used in application with no backlight, either because of insufficient backlight power or because of high ambient light. They are particularly suitable for use in battery operated equipment where an adequate level of external light is always available. 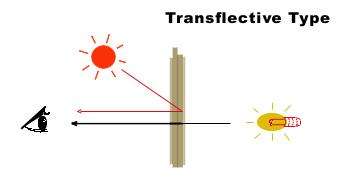 Transflective displays have a rear polarizer which includes a translucent material. And it reflects part of the ambient light, and also transmits backlight. Therefore, the image can be viewed in high or low ambient light when the backlight is switched on.