How do resistive and capacitive touch displays work?

In resistive touch screens, two very thin layers of material are separated by a thin gap of air. PET film and glass are typically used. Both upper and bottom layers are lined with conductors such as indium tin oxide (ITO). The conducting sides are placed facing one another. So, when you press the screen with finger or stylus, it connects top and bottom layers, creates a change in resistance (an increase in voltage). RTP controller detects this change, and calculates its coordinates, then determines the position of touch. 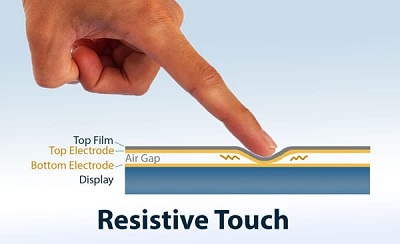 Capacitive touchscreens, on the other hand, respond directly to the touch of your finger or an input device such as a stylus. On top of LCD panel, lies a thin layer of transparent electrodes.  When a human finger touches the screen, some of the electrical charge travels from screen to user. The change of capacitance is then detected by sensors located at screen's four corners, allowing controller determine the touched location. 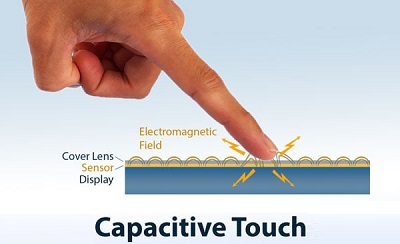 Advantages of each type

Resistive touch screens are effective in a variety of environments. Any object capable of applying force to the screen can trigger a touch event. For example, users wearing gloves can operate RTP with no difficulty.Resistive touch screens work well even when liquids or debris are present on the surface. This makes them especially useful in situations where substances could disrupt the function of other types of touch screens, for example,  agricultural equipment, boats and underwater machinery. Due to its mature technology and simple structure, cost of resistive screens is lower.

Supporting of Multiple touches is a clear winner for capacitive touch screens (CTP). Thanks to smartphone and tablet, users are comfortable with using gesture on screen. And capacitive touch screen is what user is familiar with. In more specialized settings, such as multi-player gaming application, capacitiv e touch screens can support more than 10 inputs at a single time. Additionally, CTP needs no calibration and is highly accurate.

Disadvantages of each type

Resistive touch display cannot determine the location of a touch if more than one input is present. In terms of visibility, the film substrate commonly used as the top surface in resistive touch screens is less transmissive than glass. This leads to reduced brightness and a certain level of haze compared to touch screens with a top layer of glass. The film layer can also expand or contract based on temperature, which alters the distance between the two layers and affects touch accuracy. Additionally, the film substrates are susceptible to scratches and can start to wear away with repeated use, necessitating occasional recalibration or replacement over time.

Capacitive touch screens depend on variations in an electrical field to operate. While a passive stylus can activate this screen, a non-conductive tool like a pencil can't. If cost is a top concern for a project, CTP may not align with budget limits. It is a more expensive technology than resistive screens, although it continues to grow more accessible in terms of price as the technology advances and improves.

More knowledge about touch screens can be found here 🔜

If you have any questions about Topway TFT LCD touch panels, please feel free to contact: Sales Inquiries, Customer Service or Technical Support.